As a continuation of our commitment to share stories by community members, OurSpace embarked on a second set of stories that highlight the diverse sexual health experiences of young guys who like guys.

Special thanks to Nicholai Farber, the artist who created the images associated with each of the stories below. You can check out his website at www.yozhikisblue.com or on Instagram (@yozhikisblue).

“You DTF?” These are the three letters that I like seeing in text messages. My usual reply is one word: “Always”. Last time I encountered these three letters, it was from someone who failed to disclose his HIV status. I know it sorta freaked me out. I tested shortly after. Results came back negative. It made me realize that the fault wasn’t solely theirs. I should have asked prior to sex. I felt more sorry for the other guy; he panicked.

There’s no way I can comprehend the fear and complexity of HIV criminalization. DTF has a new meaning to me now: Down to Forgive. I know it sounds cheesy, but my reply to those letters will be the same. 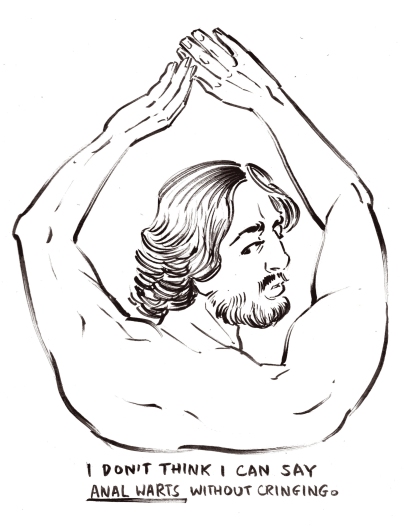 My boyfriend and I made it a weekly event that we find a “third” for casual fun. We thought this would keep things interesting and exciting. One night he had to work late and I went on my own. I spotted the car down a few blocks from our apartment. I got in and told the man to keep driving. We drove in circles till we found a spot to park. I’m usually not into this stuff without my boyfriend, but whatever, people have urges. He gave me a blowjob while I reclined the passenger seat. “Oh yeah, this is what people movies do,” I thought to myself. Sadly, it didn’t last long. I finished, got out of the car and walked home where I showered and crashed immediately. 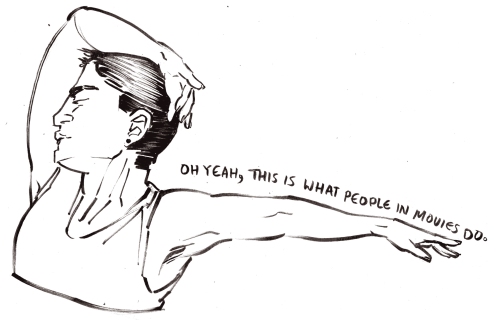 The next morning, I noticed something crusty in my briefs. I went to piss and suddenly realized what was happening. It was gonorrhea. I told my boyfriend, he said not to panic. He chuckled, gave me a hug and chuckled some more. He cancelled all his plans for the day and took me to go treatment. He really didn’t have to scrape his whole day for me but he did. I think he anticipated that this would eventually happen in our relationship. I lucked out, I never anticipated anyone ever being so nice to me about getting gonorrhea.

I walked in to the clinic for the first time in my life at 20 years old, feeling happy like I was going to pick up my birthday cake. The nurse explained that she was going to do a point of contact test. She pricked my finger, took a drop of blood, mixed the liquids together, and as I was looking at her, she looked up at me and said, “I want you to know that people with HIV live full and productive lives… The test is reactive.” My crying was hysterical; I hoped that I was only dreaming. I gave her the contact info of my partners. Just before I left, she gave me a hug and told me to be strong and that it’s, “Only a semicolon in the sentence that is life.”

I was going to run into oncoming traffic and end my life when I left the clinic, but what she said sunk in, my life isn’t over but a new chapter has started. I told my partners. Some were supportive, others lashed out on me saying things like, “How many guys did you f*%k?” and “That’s f*%ked up.” We’re on good terms now, but at the time all I could think was, “How dare you make this about yourself?? I’m the one who tested positive, I’m going to be taking meds for the rest of my life, I’m the one whose life has changed, not yours.

Fast forward a few months now, I have surrounded myself with other amazing poz folks and I am taking better care of my health than I have before. Plus I still have amazing partners who take care of my needs.

HIV isn’t a death sentence anymore, but it is a life sentence. Be safe and love each other.

Having an open relationship with a poz guy was a foreign concept to me. I always wondered what would happen if I got something and accidentally gave it to him. So far, this has been the most adult relationship I’ve ever had. We share stories and he openly lets me fuck other guys, and sometimes it’s fun when he watches. It’s even more exciting when he lets me watch him play with other guys.

Eventually it happened, I tested for Syphilis. When I told him, there was a short pause. He smiled, giggled and asked if I enjoyed myself. I am really lucky I found him.

6. That One Time I Bottomed 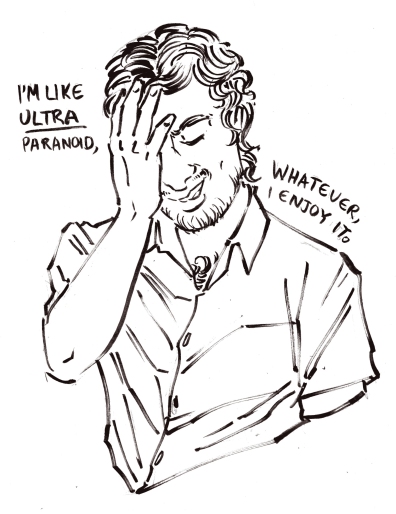 I usually top so rarely worry about getting my ass swabbed. But one time I got so fucked on Tina that I bottomed for this guy. The sex felt unreal, but it was amazing.

Having to talk to my doctor about my substance use and my sex are two worlds I like to keep apart. Part of me thinks she’s aware that I fuck when I’m high. I’m like, ultra paranoid. Whatever, I enjoy it.

7. My Relationship with My Medical Support Team 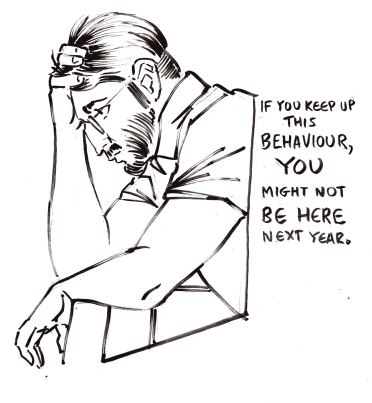 “If you keep up this behaviour, you might not be here next year.”

Those are the words of my HIV specialist. He really scared me. He said this to me after I tested positive for gonorrhea. I understand things are more complicated once you’re HIV+ but my relationship with my medical support team shouldn’t be one of those complicating factors.

So have you guessed what I got? It was chlamydia! Ta-Da!

Though I don’t use their services often, there are nurses and doctors I’ve seen at SMDHU over the years who are awesome. AWESOME! But I’ve dealt with employees who are less so. One nurse in Barrie sounded and appeared quietly aggressive when she explained that as a bisexual man, I was at greater risk for Hepatitis-C.

Being contentiously “factual,” it suggests that bisexual men are typically apathetic — even careless — regarding feces cross-contamination (I’m paraphrasing; she preferred to say “oral-anal contact”). As judged as I felt — as BLAMED as I felt — and as grossed-out by the implication as I was, I kind of understand it. I believe that with reasonable care, asses are sexy, poo is unquestionably gross, and they are often together.

My problem: The sexual transmission of Hep-C is far from settled science. I can’t even hold out my arms to say, “I’m not an intravenous drug user,” because I have a small amount of scarring from when I gave hundreds of blood samples over several clinical trials for the pharmaceutical industry. Again, it’s understandable, if the SMDHU’s greater mandate is harm-reduction — better safe than sorry. 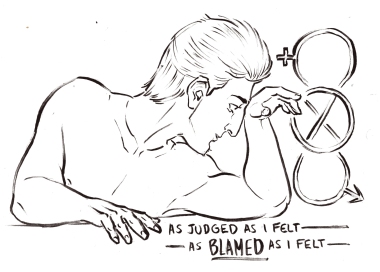 A decade and a half later, one health unit staff member’s tone and posture has affected me this way. But my general anxiety level, which laid the groundwork for the power of her subtle criticism and the depth of its effect, is a comment on rural Canadian society. We may be equal under law, but not in the hearts and minds of my fellow, variously educated neighbors who can be nasty when they think they’re among fellow bigots, but the public health professional I spoke of was an educated, credentialed person.

It was 1978. I was a 15-year-old runaway from Toronto working E53rd St in New York City. It was exciting and dangerous and I was in it all the way. I was living with a friend in Brooklyn. One day I realized my little Elvis was discharging and it stung when I peed. I had no idea what it meant other than it wasn’t good. My friend looked at it and without a second’s hesitation informed me I had the clap!

So I made my way to the King’s County Hospital where I didn’t have to show identification if I was there as a result of an STD. This doctor was not nice. He had to take a swab from the hole in my dick and he wasn’t very gentle about it at all, in fact he was gruff and I could tell he thought I was just so much white trash. Made no difference to my young ass, I was there for a diagnosis and a penicillin prescription… Mission accomplished. Within days I was peeing normally and the gross discharge was gone. I was back in working order. 53rd street beckoned, so off I toddled to the Church St subway station and over The Brooklyn Bridge to the Upper East Side where all “us” swells congregated. A 20-dollar blowjob is only cheap and sleazy if you approach it that way, ya know!

I always left the scene of my crime with my head held high, the same way I left the King’s County Hospital!